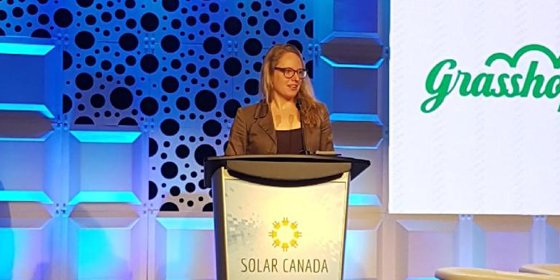 On December 5th, 2017 Janice Ashworth was named the 2017 Solar Woman of Distinction by Women in Renewable Energy (WiRE). This award is given annually to a woman who has contributed significantly to the expansion of the solar power sector in Canada, and was presented at this year’s Solar Canada Conference in Toronto earlier this month.

As General Manager of the Ottawa Renewable Energy Co-operative since 2012, Janice Ashworth has been a driving force behind its expansion in that time.  Under Ashworth’s leadership, the Co-operative grew to become the region’s leading impact investment opportunity by financing 17 solar power projects exclusively through individual investments totaling $7 million. Earlier in 2017, Ashworth was named to the Fourty Under 40 Business Leaders by the Ottawa Business Journal.

“Janice’s valuable contribution to her community and to the solar sector more broadly is clear,” said Rebecca Black, WiRE Co-Founder. “She represents the leadership that we need as we transition to a sustainable energy future driven by strong diverse perspectives.”

A champion of solar energy and the clean energy transition for over a decade, Ashworth’s strong belief in community-based partnerships has resulted in unique partnerships; the most recent of which is a first-in-Canada partnership between a co-operative and First Nation group of a solar project in Alfred, Ontario.  Other noteworthy collaborations include two local school boards, five non-profit and co-operative housing organizations, Beau’s All Natural Brewing Co., Ecology Ottawa, and the German Embassy.

“This year marks the third year of the annual Solar Power Woman of Distinction Award,”, said Joanna Osawe, WiRE Co-Founder and Co-Chair. “Janice’s impressive track record was well received by the adjudication panel.” All nominees are evaluated on their merits of excellence in leadership, advocacy, research and development, community engagement and efforts to increase the adoption of solar power technologies.

The Ottawa Renewable Energy Co-operative was recently awarded four new power purchase agreements which will see the Co-operative’s generating capacity jump to 3.35 MW in two years, from 1.7 MW.  Two of those projects will be built in partnership with the Centre-East French Catholic School Board.

Residents of Eastern Ontario and Western Quebec will have an opportunity to positively impact their community by investing in these new solar power projects close to home.

About Women in Renewable Energy (WiRE)

WiRE has been striving to advance the role and recognition of women working in the energy sector since 2013 through capacity-building, mentoring, networking opportunities, student bursaries, and much more. Learn more about WiRE here.