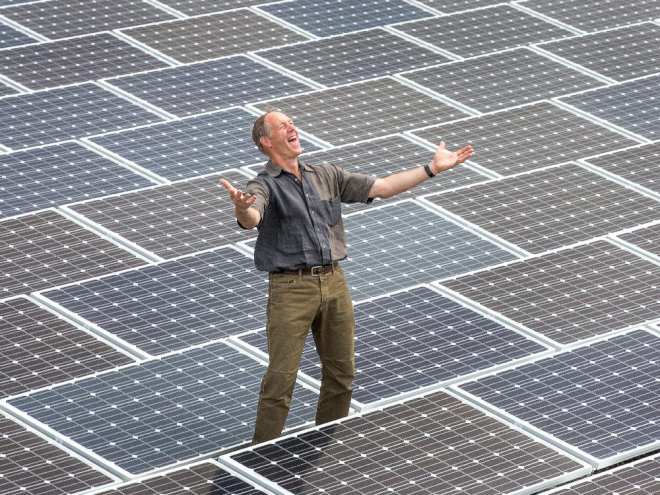 Solar power is threatening to save the world again. And this time, it really, really means it.

Forget the energy evangelists for a moment — trust your own eyes. You can’t swing a cat in this town without hitting a solar panel. Hydro Ottawa reports that, in just over five years, some 720 renewable energy projects are now feeding the grid, the vast majority being solar.

Take just one school board. The Ottawa public has solar projects at 41 schools and there are plans to add 24 more. The other three boards have a combined 20 projects and growing. The French public board — how did this slip by? — is producing some 1.2 megawatts of electricity, enough to power roughly 200 homes. Loblaw’s, for Pete’s sake, has 62 solar installations in Ontario.

And Bloomberg just reported this astounding fact: in 2013, for the first time, the world added more renewable energy capacity (143 gigawatts) than oil, coal and natural gas combined (141), described as a historic “turning point.”

So here we are, on a gorgeous June evening, on the roof of Franco-Cité, a French Catholic high school on Smyth Road, with the tall, debonair Paolo Maccario, an Italian-born engineer.

He is the general manager of Silfab Ontario Inc., which manufactured the hundreds of panels that lie tilted, checkerboard like, on the flat roof. The Mississauga plant now runs 24/7, he said, and has expanded four times since 2011. “We make four of these in one day,” he said, scanning the 150-kilowatt array, which went online in February.

The story of solar cells, he explained, is comparable to the evolution of the microchip. With enough scale, with continued innovation, they get cheaper and better at an exponentially rapid rate. Not to mention the China effect.

In four years, the price of a solar cell has dropped from about $2.20 per watt to 75 cents, he said, a decrease of 66 per cent. And the trend will continue, as solar production is marching ahead in every corner of the world.

Maccario was touring the site with Dick Bakker, once an all-star football lineman with Queen’s University and now the president of Ottawa Renewable Energy Co-Operative, and its treasurer, Johan Hamels, a longtime Green Party activist in Belgium and Canada.

Bakker installed a $70,000 solar grid on his rural property at Manotick Station in 2010. Today, it would cost less than half and produce better.

They think the comparison to computers and online networks is apt.

“When I was in high school, we worked on a dumb terminal connected to a couple of centralized computers,” said Bakker, in his late 50s.

“Now, over the last 40 years, the grid has evolved so that everybody is carrying a main frame in their pocket.”

The c0-op, which began in 2010, now has 400 members who invest sums in exchange for a set return over long periods, usually 20 years. It has nine projects up and running, fully owned or shared, and four more in the pipeline. They are typically in the 150-to-200-kW range — much bigger than a household unit, but smaller than industrial monsters.

The co-op stresses the idea of local ownership and fundamentally believes in the wisdom of producing power very close to where it will be consumed. Bakker does not see one “silver bullet” solar solution to Ontario’s energy needs but many varied options of tapping into renewables — water, wind and sun.

Much of the progress now depends on the ability of the existing grid to accept the power.

“We’re going to move forward, then sideways a bit, then forward again. It all ties back to the grid and if the grid in that locale is set up (to accept production).”

A senior bureaucrat in the Ministry of Energy recently told a conference that Ontario has 1,550 megawatts of solar electricity installed, enough to power roughly 300,000 homes, with another 825 megawatts under way.

There has been controversy, of course, about solar subsidies from taxpayers, which were once at levels some found obscene, especially in an over-supply market. But, in hand with cheaper setup costs, new contracts for small projects pay 38 cents a kilowatt/hour not 80.

The industry predicts solar will be competitive with other renewables by 2018. Look at fossil fuel exploration and the trouble with pipelines, they ask: where will the smart money go?

“It’s the money that makes things go around,” says Maccario.

There is considerable buzz, as well, about a new generation of sleek-looking batteries built as an offshoot of the Tesla electric car. The batteries, intended for homes, industries and utilities, store power for the dark hours or when the draw is at peak.

Then again, there is always considerable buzz in solar — perfectly sunny somewhere, even if it’s the future.