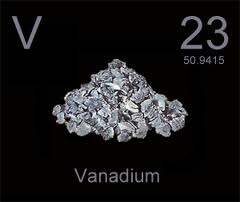 Renewable energy – solar and wind – works like a charm when the wind is blowing strongly enough to whip windmill blades into a frenzy, or the sun is baking down onto strategically-placed solar panels. The trouble, of course, is that the power they produce is intermittent. Wind has an annoying habit of dying down, as does the sun in hiding behind clouds.

Harnessers of wind and solar power sometimes face the dilemma of how to store the energy they produce. They need a way to store power until it’s most needed during peak loads, and to release it gradually if too much comes in at once.

One option for energy storage is the use of a technology originating from a metal most have never heard of: vanadium. When an electrical current is passed through two tanks of vanadium dissolved in sulfuric acid, it creates a type of rechargeable battery called a “vanadium redox battery”. The battery’s chief advantages are its stability – it can be recharged up to 20,000 times without losing performance, meaning a potential decades-long life – and it can be discharged while retaining nearly all of the vanadium electrolyte. Vanadium redox batteries are also scalable, meaning they offer nearly unlimited capacity by simply scaling up to larger storage tanks.

Read more about the technology here.