Forty Under 40 Awarded to OREC’s GM 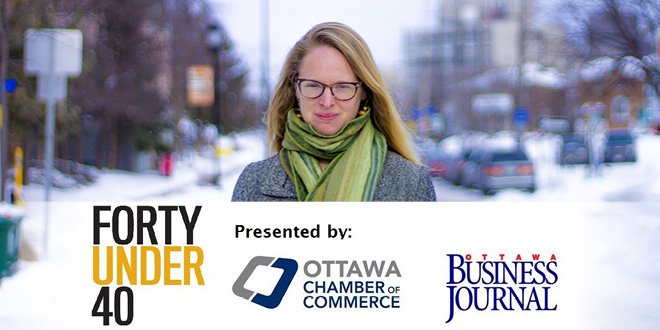 On April 24, 2017, Janice Ashworth was recognized with a Forty Under 40 award.  In this 20th iteration of the awards, a record-breaking number of applicants made it one of the toughest competitions since the award was first handed out in 1998.  The award recognizes the remarkable accomplishments and community involvement of Ottawa’s best and brightest business leaders under the age of 40.

Janice has been a tireless advocate of community-owned power for more than decade.  She played an important role in developing 17 solar power projects in Eastern Ontario with a total generating capacity of 1.7 MW.  Janice’s unwavering commitment to the cooperative business model and renewable energy development has helped the co-op reach countless milestones from membership development to securing $7 million in investments from the community.

“I think that it’s terrific to see such interest in this awards program as we celebrate our 20th group of recipients,” said OBJ publisher Michael Curran. “I think it’s fair to say this might have been the toughest competition we’ve seen in two decades. The recipients should feel particularly proud.”

Forty Under 40 recognizes accomplished business leaders who are under the age of 40 and give back to their community. The awards are co-hosted by OBJ and the Ottawa Chamber of Commerce.

“The level of talent in Ottawa is second to none, as these awards once again demonstrate,” said chamber president and CEO Ian Faris. “The entrepreneurial spirit of this year’s recipients is sure to pay major dividends for our region in terms of continued economic growth and prosperity.”

Recipients were assessed on a 40-point system, with a maximum of 20 points for business accomplishments, 10 points for professional expertise and 10 points for community involvement.

OBJ will profile each recipient in its June 5 issue, and the group will be celebrated at a gala at the Hilton Lac-Leamy on June 16.