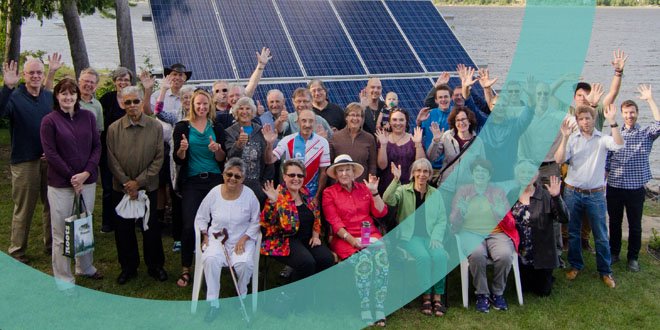 Over the course of a 14-week period in 2017, more than 160 residents of Eastern Ontario invested $1.98 million to finance four new solar power projects.  OREC’s fifth securities offering is the latest round of investments offered by the Co-op which allows individuals to invest in large-scale solar power projects and earn a solid return.

During the final days of the offering, existing OREC members and new members flooded the co-op’s office to invest in community-owned solar projects through their RRSPs and TFSAs, or by purchasing preference shares or member investment notes before the April 30th deadline.

The sheer amount of people who came through our door during the last week of the offering was astounding and resulted in $800,000 of new investments.  This is further evidence that the demand for environmentally and socially responsible investments is on the rise across Eastern Ontario. It also proves that the shift toward a green economy is taking place in our own backyard.

Since 2012, OREC has grown to a 700-strong membership, raised over $7 million from local investors during five securities offerings, and is in the process of building 1.7 megawatts of renewable energy generation.   The most recent wave of investments which closed on April 30th, is currently being used to finance four new solar power projects in the region. Three Ottawa area roofs are receiving solar photovoltaic (PV) panels: the Twin Elm Rugby Park stadium in Richmond, KIN Vineyard’s new winery in Carp, and a private commercial building in Leitrim. Also, Alfred, Ontario will be home to a 500 kW solar project in partnership with the municipality and Keewaywin First Nation. The projects are under construction and will start to produce power for the grid starting in June.

Over the next year, OREC will continue to make its successful co-op model available to residents of Eastern Ontario to invest in local renewable energy initiatives, and will continue growing its portfolio of 100 per cent community-owned green energy projects across the region.