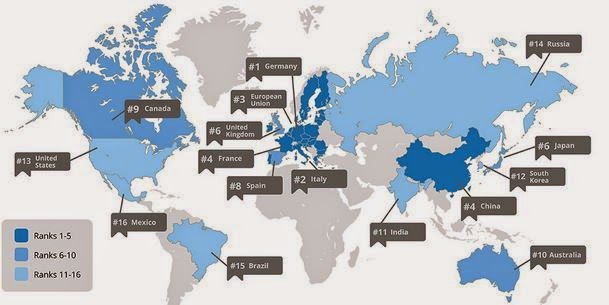 Germany comes in first in a new energy efficiency ranking of the world’s major economies, followed by Italy, the European Union as a whole, China, and France, according to the 2014 International Energy Efficiency Scorecard published today by the nonprofit American Council for an Energy-Efficient Economy (ACEEE). New to the rankings this year are four nations: India, Mexico, South Korea, and Spain.

Now in its second edition, the ACEEE report finds that, while some countries are still significantly outperforming others, there are substantial opportunities for improved energy efficiency in all economies analyzed, including the U.S., which ranked 13th out of 16 nations – behind countries such as China, Canada, and India. The new carbon pollution standards for existing power plants proposed this June by the U.S. Environmental Protection Agency (EPA) would be a major stride in the direction of greater energy efficiency in the U.S. There are dozens of other international best practices that the U.S. could implement to improve its score.